Oskar von Horrificus is the main character of the series. He is a vampire who has hemophobia, a fear of blood, which can also be called "blood phobia". He attends the school for vampires, which is run by his uncle, Count Alarich von Horrificus.

Oskar wears teal shorts, blue shoes, a green vest over a white button-up shirt, and a red tie. He has black hair that has multiple spikes.

Oskar is very good hearted, honest and fairly kind; he is also very supportive towards all of his friends and goes to great lengths to make sure that everyone is happy and safe; no matter the risk or consequence. Oskar is a vegetarian and does not particularly like or care for traditional vampire food. Other than his hemophobia, Oskar has most of the qualities that vampires have; such as sleeping in a coffin, weakness to garlic, sensitive pale skin that can turn to ash by the sunlight, fangs for teeth, having the ability of transformation to a bat, controlling his shadow and lack of reflection in mirrors and on film.

Even so, Oskar is very much different than his fellow vampires, and he often realizes how different he really is from the others.

Due to having the headmaster of the school as his uncle, Oskar often gets pressured by his family's history and Count Alarich reminds him constantly to bring glory to the Horrificus name. He is often mocked of his traits by Stoker Flestcher. He somehow manages to pass the tests in every episode, making all his uncle and other faculty very proud of him.

Sunshine is best friends with Oskar and has a huge crush on him as well. Oskar is in love with Sunshine and tends to bring her roses every time he goes to see her. Oskar protects Sunshine whenever she is in danger, and goes to long lengths to keep her safe. They've shared many moments together throughout the series and are a very sweet couple.

Gothetta is Oskar's only female friend at his school, since she is the only female student. Gothetta has a crush on Oskar but the feeling is unrequited, and seems to be oblivious to Oskar. Despite this the two are very close friends and they trust each other with almost all of their situations, and they are always there for each other. Gothetta shows a lot of jealousy when it comes to the relationship between Oskar and Sunshine, and rages on Oskar on how wrong it is for a vampire to be in love with a human; but despite this, she'll help him through all his troubles with Sunshine.

Princess Nerfativi is immediately intrigued with Oskar considering that he is the nephew of Count Alarich von Horrificus. Oskar tends to have taken an interest in her too, as he brags to her about his relationship with the count and goes far as to saying that they are close and friends. Oskar also tries to hide the fact that he is scared of blood from Nifi.

In the episode, The Cat's Meow: Oskar Jr. Jr. used to be Sunshine's cat, but begged Oskar to take care of all her cats so they wouldn't be taken to the shelter. Oskar Jr. Jr. becomes a vampire cat when Lenny bites him, and ultimately becomes Oskar's new pet. 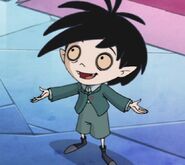 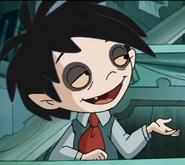 Add a photo to this gallery
Retrieved from "https://schoolforvampires.fandom.com/wiki/Oskar_von_Horrificus?oldid=5849"
Community content is available under CC-BY-SA unless otherwise noted.