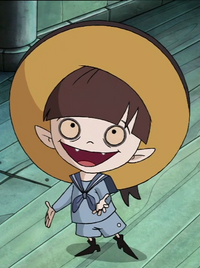 Klot Tratzum is the youngest vampire in the school. He is a very innocent and naive vampire, but always means well. Because Klot is the youngest, he isn't able to participate in many school activities such as The Vampire Games. Klot's best friend is Ashley von Ghoulfangs. Klot's father, Klaus Tratzum, is a famous pianist.

Klot is much younger than all of the other little vampires. He wears black boots, light-blue shorts, a light-blue shirt, and a small blue cape tied in front. Klot is most noted by his large, yellow-orange hat, which is circular with a dark brown trim. He has short, brown hair.

Klot is very innocent and sweet, and is quite a baby. He is easily influenced by his peers, and sometimes that can get him into trouble. He is easily scared by many things, and unlike the other vampires, Klot has many fears and tends to cry whenever he comes across something he fears. When he is scared he usually runs to Gothetta Gothetticus, who he sees as a mother figure. As young as he is, Klot has proven himself a smart and successful vampire in many occasions, even being the hero of many dilemmas his friends are going through. Klot is always spotted with his best friend Ashley von Ghoulfangs , and is often seen carrying him around in a bassinet for his dolls. Not many vampires has faith in Klot and his abilities as a vampire, but Ashley is always there for Klot and giving him much hope and faith.

Klot has mentioned that he feels pressured by his father, Klaus, due to his success as a famous pianist. 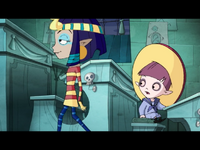 Klot admires Princess Nerfativi and follows her around like a small puppy. He likes to tell her silly things, such as his bruises and facts about his friends. Klot thinks that Nifi has pretty eyes. Nifi doesn't get annoyed by him, as she finds him adorable. Due to the age, obviously the two didn't develop a relationship but Klot had a small crush.

Retrieved from "https://schoolforvampires.fandom.com/wiki/Klot_Tratzum?oldid=5309"
Community content is available under CC-BY-SA unless otherwise noted.