Count Alarich von Horrificus is the headmaster of the school for vampires and is the uncle of Oskar von Horrificus. He is close friends with the professors of the school, but not much is known about the Count, for he is a very mysterious character and likes to keep things private.

The Count is tall and slim, with sharp facial features, long fangs, and a moustache. He has long brown hair, and wears a trenchcoat and tophat. His eyes are completely red, with no pupils or irises.

Count Horrificus is a regal, strict and confident vampire; having seen and been through a lot in his life. Count Horrificus handles all of the finance and problems in the school for vampires, and whenever the students are in trouble they are sent to him for punishment. Count Horrificus can be quite impatient and quick-tempered upfront, but deep-down he is quite a soft and kind vampire who has emotional scars. When it comes to trouble at school, the Count often ignores his students warning and tells them to leave it to the adults. He does trust his students though, as he has left them alone in the castle on many occasions. Due to having the head master of the school as his uncle, Oskar often gets pressured by his family's history and Count Horrificus reminds him constantly to bring glory to the Horrificus name. 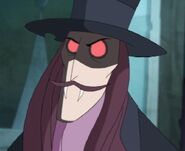 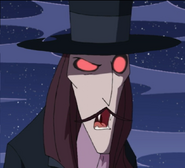 Add a photo to this gallery
Retrieved from "https://schoolforvampires.fandom.com/wiki/Count_Alarich_von_Horrificus?oldid=4530"
Community content is available under CC-BY-SA unless otherwise noted.