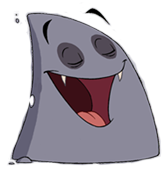 Ashley von Goulfangs was once a vampire but due to him being exposed to the sun he was burnt and turned into ashes. Despite his conditions he still attends the school of vampires and participates in all the lessons and classes. Ashley is known as the comic relief through out the series.

Ashley is often cranky and sarcastic, and a little bitter towards his friends due to the fact that he is a pile of ash and not a vampire anymore. He often gets sad about his condition and tells his friends stories of when he was a vampire, and claimed that he was the best vampire in all the land where he comes from. Ashley is also very observant, and notices things the other vampires don't such as behavior in others and danger around the castle.

Ashley's best friend is Klot Tratzum, and are always spotted together. Klot carries him around in a bassinet for his dolls. Not many vampires have faith in Klot and his abilities as a vampire, but Ashley is always there for Klot and giving him much hope and faith.

When Ashley was a vampire, he claimed that he was the best vampire ever, was very good with girls, and always had one by his side. Ashley gets sad when he thinks of those days and would do anything to be a vampire again. He once took over Oskar von Horrificus's body on the night of Sunshine Polidori's dance, getting to live out his dream for the night.

In the episode Ashley in Love, Ashley finds himself lonely and longs for a girlfriend so his friends set up a date with Asha, another vampire who was burnt to ashes. The two connect instantly, and Ashley claims that they are soulmates. This is the only time Asha appears in the series.

Retrieved from "https://schoolforvampires.fandom.com/wiki/Ashley_von_Ghoulfangs?oldid=5294"
Community content is available under CC-BY-SA unless otherwise noted.